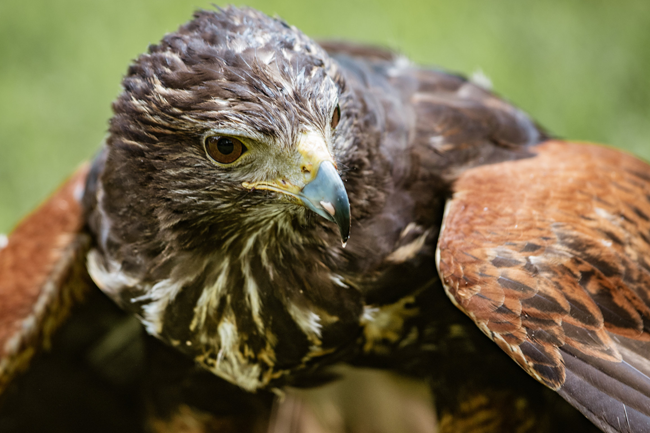 Being a wildlife rehabilitator has its rewards. And I don't mean just the satisfaction of releasing some injured or orphaned animal back into the wild—though that's why many rehabilitators stick around despite long, thankless hours of cage cleaning and other dirty work.

For me, after more than 30 years in the business, I find rewards in simply getting to know wild animals in a way most people will never experience.

I know the weird, wiry stiffness of a woodpecker feather, the cobalt blue color that lines the mouth of a healthy Cooper's hawk. I know the contented squawks of a baby squirrel with a full belly and can pick up on the unique smell of a turkey vulture or an osprey from a mile away.

Then there's that one privilege I wish I'd never been granted—the ability to diagnose, at a glance, a bald eagle suffering from lead poisoning.

It happens far too often, and the signs of it are distinctive. In classic lead poisoning, the bird strikes a pitiful stance called tripoding. Unable to hold its head up, it will stand stooped over with its beak touching the ground. The box it arrives in will be streaked with bright green droppings, a sign of what this toxic metal is doing to the digestive tract.

Often the stricken bird is honking and snorting, its compromised brain reverting to the eagle equivalent of "baby talk." If it's not vomiting yet, it will eventually, no matter how slowly you try to introduce a bland diet.
‍
If that all sounds depressing to you, good. It should make you sad for the simple reason that the state these birds end up in is almost surely the result of man-made hazards, and therefore totally preventable.

For humans, the problem with Lead and other heavy metals is associated with old water piping, paint chips, environmental exposure at home or in the community, cheap, poorly made toys, ceramics and cookware, herbal and folk remedies, cheap cosmetics, and even some spices. We know that human exposure, especially when young, can cause lasting disability. Children exposed to lead paint, whether chewing on stray chips from the windowsill or inhaling the dust of paint as it's scraped or sanded, are most at risk.

For bald eagles, the source is different, and so is the fix: Converting those in the hunting community over to non-lead ("non-toxic") ammunition.
‍

The idea of a lead-poisoned bald eagle should disturb you enough to want to do something about it. But what? The first step here isn't to demonize hunters or guns but to educate yourself and your community. Be the Solution! (That's the philosophy here at KnowYourH2O and the Path to Clean Water, and it applies well. Get informed first!)

Splitting into warring tribes or bands rarely brings a solution. Instead, when we inform ourselves and others of the facts, "Building Conscience and Support," we can accomplish more.

Remember that hunters were among the first and the most ardent conservationists our country has ever known. Their status as faithful environmentalists holds true today. A sportsman's intimate relationships with wildlife produce an understanding of The Big Picture that's tough to achieve in any other way. Hunters, trappers, and fishermen are as connected to the ecosystems they frequent—the forests, fields, and streams—as a person can be.

As a group, sporting men and women have stepped up to live in harmony with these systems time and again, changing their practices in response to new and better information on conservation practices. Bounties on owls or goshawks, for example, faded into the past as the importance of predators came into focus. Laws including seasons, bag limits, and creel limits are just common sense today for every sportsman who wants children to enjoy wild things tomorrow.

So why single out hunting as the source of our lead poisoning problem?

The fact is, that's what the science tells us. Studies of lead isotopes—something like a chemical signature helping to trace the contaminant's source—show that lead poisoning in eagles and other birds result from their ingestion of shotgun pellets (Source). Not paint chips, not old car batteries, not fishing tackle—though that last can be a problem, too—but shotgun pellets.

Scavenging birds such as eagles can get sick after feeding on the remains of animals killed with lead shot. Unlike people, who'll spit out the occasional pellet found in a wild game meal, birds swallow without chewing. Pellets or pellet fragments end up in the gizzard, a tough, muscular stomach, where they're finely ground before being absorbed into the bloodstream.

Birds, just like people, have no use for Lead in their bodies, not even in trace amounts. Check the back of your multivitamin bottle, and you won't find it listed along with copper or magnesium. There is no recommended daily allowance, no acceptable dose. Lead is toxic to every organ system in the body.

A sick bird can't stand, can't digest, can't engage in even minimal physical activity without exhaustion. It may survive lengthy and costly treatment with chelating agents—medications designed to bind with the metal so it can be eliminated through the kidneys—only to die of heart failure once it transitions to an outdoor space for flight therapy.

In robins. How it gets into songbirds isn't yet known, but it may indicate how prevalent the metal has become.

To be fair, lead poisoning in eagles is not what biologists call a "population-level" problem. There remain plenty of birds out there healthy enough to reproduce, and their numbers remain at an historic high. Protections put in place decades ago led to cleaner, more stable habitats for these and many other species.

But for anyone "privileged" enough to see the ravages this toxin takes on an individual bird, the population argument doesn't wash. Lead may not matter to the population as a whole, but it matters very much to the bird too sick to get out of the way of its own excrement. The one reduced to a stinking mass of green-stained feathers, tripoding and vomiting in a rehabilitation center cage.

So, what's to stop a sportsman from switching to non-toxic ammunition? Sometimes it's just momentum, or maybe a lack of knowledge and awareness. We use lead shot because we've always used lead shot, and we're familiar with it and know how it behaves when it hits a target – and because that's what our fathers and grandfathers always used.

Sometimes it's cost or availability. While recently, non-lead ammunition has come down in price and gone up in inventory, all types of bullets and shells have been harder to come by in some instances, often due to COVID-related supply chain problems.

But those of us in the wildlife rehabilitation field, those privileged to care for sick eagles with the hope of returning them to a safer environment, have every faith that the sporting community will come through, as they always have. We believe that momentum will shift, and one day, hunters will buy non-lead shot because that's what they've always done – because they've gotten comfortable with it. Eventually, they'll use it because that's what their fathers and grandfathers used.

They've done it before. Not just in accepting things like bag limits or predator protections as a good conservation practice, but in shifting away from lead shot.

In 1991, these toxic pellets were banned for use in waterfowl hunting. Until then, birds such as loons and grebes would accidentally ingest lead pellets that had settled into lakes and rivers. Those birds did suffer population-level effects, so sportsmen stepped up and solved the problem. Today they have universally embraced steel (non-toxic) shot as the only acceptable type for waterfowl hunting.

More recently, the Pennsylvania Game Commission began supplying its field officers with non-toxic shot for euthanizing large animals, such as badly injured deer or bears. These officers have embraced the switch and can now end an animal's suffering without inadvertently poisoning the scavengers who'll come to feed.

We encourage you to learn more if you are or know a sportsman. And you don't have to take it from me. The organization Hunting With Non-Lead hosts a website (www.HuntingWithNonLead.org) written for sportsmen, by sportsmen. It touts the safety and efficiency of alternatives to toxic ammunition, with solid background info on why the issue is so important.

The tide against toxic ammo is beginning to turn. And just as we now find the hazards of lead paint or lead pipes completely unacceptable, we will someday find it unimaginable that we'd pollute our forests and fields with fragments of lead shot.

Sharing those habitats with eagles is a privilege for us all. And with that privilege comes the responsibility of keeping them safe from problems we might create—especially when, like lead poisoning, the problem is entirely preventable.
‍

Looking to buy a gift for a hunter, trapper, shooter or fisherman? Consider lead-free products. Look for the words "lead-free" or "non-toxic" on the packaging.

Visit www.HuntingWithNonLead.org - website developed for sportsmen, by sportsmen, touting the safety and efficiency of alternatives to toxic ammunition, with solid background info on why the issue is so important.

Lead and Zinc Toxicity in Birds

Why lead in water is bad for humans

Source 3: Use of stable isotope ratios to distinguish sources of lead exposure in wild birds