Ozonation as a Drinking Water Treatment - Is it in Your Tool Box? 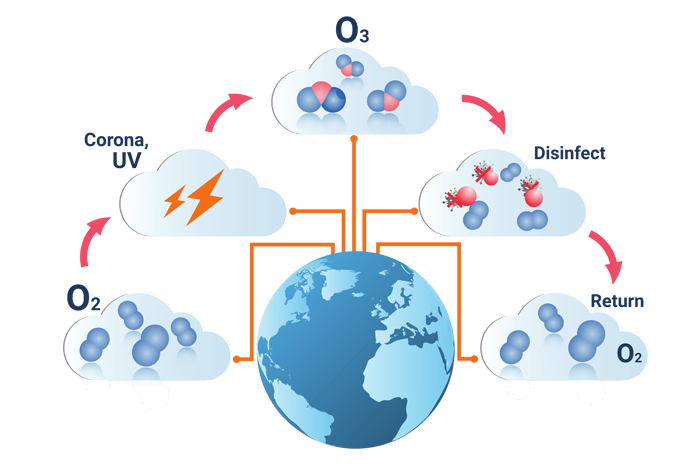 This article is featured on the site Water Conditioning & Purification Magazine

When trying to build a foundation in water treatment, it is essential to not only understand the various treatment processes but to have a solid understanding of the technical history, chemistry, and historical applications of the water treatment process or chemical. This is because water treatment professionals are not salespeople but first professionals and scientists. Unlike other treatment processes, ozone is difficult to see or touch, but this gas has a very distinctive odor with a threshold odor concentration of 0.01 to 0.04 ppm. Ozone is produced naturally when air is exposed to an electrical discharge, such as during lightning storms, or through a reaction with nitrogen oxides and volatile organics in the atmosphere and UV irrigation that produces ground-level ozone or "SMOG." You can also detect the smell of ozone near electrical generators, electric motors, some air purification devices, and even copy machines/laser printers (Source 1). Therefore, the interaction of oxygen in the atmosphere with UV radiation or an electrical discharge can create ozone. In this process, the oxygen molecule (O2) is split, and the free Oxygen (O) that is released is not stable, and it combines with another oxygen molecule to create Ozone (O3).

Scientists accidentally discovered man-made ozone while experimenting with electricity. Through trial and error analysis and experimentation using the scientific method, these scientists and inventors developed ozone generators that mimic natural processes (Source 2). Ozone is a strong oxidant that is partially soluble in water and can interact with both inorganic and organic compounds and other gases. In some cases, this interaction creates a benefit, but ozone may react negatively and cause health issues or damage equipment. For example, ozone can react with dissolved iron, manganese, and arsenic to create oxidized particles that can be removed from the water. It can also negatively react with piping, fixtures, and system components if made from cast iron, copper, brass, polypropylene, rubber, or nitrile (Source 3). In my youth, I considered the ozone treatment process a magic black box used overseas and in the food, aquarium (pool), and bottled water industry, but not widely used in drinking water treatment applications in the United States.

In 1785 a Dutch Chemist, Martinus Van Marum, was experimenting with electricity and observed a light blue gas that smelled. He called this gas "the odor of electrical matter." In 1840, Christian Friedrich Schonbein, a German-Swiss Chemist, gave this gas a name. He named the gas "ozone" after the Greek word for "to smell" (ozein), and by 1865 Thomas Andrews an Irish Chemist and Physicist, proved that ozone was a form of oxygen.

In the late 1850s and 1860s, ozone was used to disinfect operating rooms and drinking water, but also to treat taste and odor issues with drinking water. Because of the classic smell, ozone exposure was initially considered a health benefit, but with time it was determined that overexposure could cause negative health consequences, such as chest pains, coughing, irritation and damage to the lungs, and in extreme cases, death (Source 4). OSHA regulations have set a maximum exposure limit for ozone gas in the air of 0.1 ppm during an 8-hour work period.

Ozone, i.e., Trioxygen, is usually a colorless to pale blue gas made up of three oxygen atoms that break down into Oxygen (O2) and free oxygen atom. The oxygen atom is a free radical that is a highly reactive and unstable gas with a half-life that is measured in minutes to hours. The degradation rate is a function of the water chemistry, pH, and temperature. As the ozone decomposes, free radicals of hydroperoxy or hydrogen superoxide (HO2) and hydroxyl (OH) are formed (Source 5). The first ozone generator was designed by Werner Von Siemens designed the "Siemens Type" ozone generator in 1857, and Nikola Tesla patented a corona discharge generator in 1896. By the 1900s, ozone was shown to be effective as a germicide, bactericide, and algaecide.

In 1903, an ozone drinking water treatment system using an "electrical arc" was installed and operated in Niagara Falls. Since this venture failed, the "birthplace" for ozonation for drinking water is Nice, France, and sadly NOT the USA (Source 4). Ozone can be generated by passing dried air through a corona discharge chamber, passing dried air through UV irradiation with wavelengths shorter than 240 nm, or by electrolytic ozone production. Electrolytic ozone production does not require a feed source of air or gas but produces ozone from the treated water. In the USA, ozone has been utilized by the municipal drinking water industry since the 1940s, and the most common method of ozone generation for municipal applications is the electrical discharge method. The corona discharge systems can produce ozone at a higher rate than the UV light ozone generators.

One of the unique aspects of ozone is the potentially wide variety of applications and uses for this technology over many platforms. My experience with the use of ozone has been in four distinct areas, which include:

1. Polishing and disinfecting "spring water" before the transport and bottling of the water, and the cleaning of piping, storage, and transport structures.

4. Laboratory scale treatability studies of ozonation as applied to acid mine drainage and frac water treatment and reuse.

In addition to combining ozone with other treatment techniques, it is my professional opinion that ozone is developing into a go-to technology as we move to more direct/indirect water reuse, enhancing existing treatment system performance, and managing issues with "PFOS/PFOA" through the implementation of conventional and hybrid ozonation system, such as ozofactionation.

From my experience, the biggest problems with developing or implementing an ozonation approach are:

1. Not adequately understanding all the ozone demands of the water concerning organic or inorganic matter content and not thoroughly documenting the chemistry and the biological quality of the untreated water.

2. Not checking the potential for negative interaction of the ozone with the components of the system, such as piping, pump seals, and tanks, and the need to put in place a mechanism to prevent ozone exposure to critical components and the public/user, and properly monitor the system.

The primary advantages to the use of ozonation are as follows:

1. The ozone is generated on-site and does not persist in the water. In many cases, a system does not need additional chemical treatment but may require additional filtration systems to remove oxidized particles.

3. Ozone is effective over a wide pH range.

4. Simple instruments such as an ORP sensor or real-time ozone sensor can be used to monitor system performance.

5. Ozone applications have been developed that improve aeration systems and efficiency of backwashing systems for existing conventional residential and commercial water treatment systems.

6. Ozone can be used to inhibit the formation of biofilms in water treatment processing equipment and rather small distribution systems.

7. Ozone can act to inactivate bacteria, viruses, protozoans, and some algae, and in general, the electrochemical oxidation potential for ozone is higher than most other common disinfecting agents (Source 6).

The primary disadvantages to the use of ozonation are as follows:

1. Typically, the system installation has a higher equipment and installation cost compared to other technologies, commonly requiring "clean" "dry" air or oxygen, and trained professionals are not always readily available to troubleshoot these systems.

2. The ozonation approach does not provide long-term disinfection residual and does not prevent or inhibit regrowth within a larger distribution system.

4. Ozonation requires a more detailed understanding of the ozone demand and water chemistry, such as the water's alkalinity, bromide, and hardness content, total organic carbon (TOC) content, and bacterial quality of the water to be treated.

5. The use of ozonation requires a thorough understanding of the downstream components and elements within an existing or proposed treatment system or infrastructural components of the facility, such as: the type of piping, fixtures, and tankage.

6. The process of producing ozone can produce a gas that can cause short-term and long-term health effects. Ozone is not flammable, but it can increase the intensity of a fire and is a fire hazard.

7. Some ozone disinfection by-products, such as bromate, aldehydes, ketones, carboxylic acids, brominated trihalomethanes, and peroxides, can be formed, but these could be addressed via pretreatment, adjusting the dosage, and post-treatment of the water (Source 7).

Before implementing any water treatment system or process, the first step is to learn, i.e., Get Informed. It is critical to understand the source of your water, the water quality, and the cause or causes for a particular set of problems. i.e., Get Tested. Ozone is not a magic box but a tool that will benefit the end-user if used wisely and properly. If you use ozone water treatment, we strongly recommend monitoring the system using an ORP meter and/or ozone test strips and hiring a professional to design, install, and maintain your system. Our professional opinion is that ozone technology has developed into a treatment approach that will facilitate the development and implementation of more sustainable water and wastewater management solutions. Ozone is a tool that needs to be in the toolbox.